OK
Delete ?
Warning: Adult Content
The content you were about to view is not suitable for minors.
The page that you are trying to access contains adult content, which may not be suited for minors. Please verify that you are aware of this, and are within legal age limit to access this content. Note that we take no responsibility for any content if you decide to proceed to this page as a minor.
Leave this page
I am an adult, continue
02.6 - BlackFlame49 & Lego_Tron
Like
Drag & Drop

The man stopped the cart and waited for them to get off.
“Thanks for the ride!” SuperPup1 said as he stepped onto the gravel road.
“No problem. You might find more of your kind in the local tavern,” the man said.
“More of our kind?” XillComics asked.
“Yes. Funny word choice and abstract clothes,” the man said.
“Can you tell us where we can find this ‘tavern’?” Digital_Guy_4 asked.
“Sure thing! At the end of the road you turn right twice and there you should look for the ‘red dragon’,” the man said, and rode away.
“Okay… Let’s go!” SuperPup1 said.
“Wait, are you serious right now? Who knows what we will find there?” Digital_Guy_4 said.
“Exactly,” SuperPup1 exclaimed cheerfully and began to walk.
It took them less than ten minutes to find the tavern.
“Who do you think we will find?” SuperPup1 asked the others.
“No idea, maybe BlackFlame?,” XillComics guessed.
“Maybe,” Digital_Guy_4 said. The opened the door of the tavern and gazed upon the almost empty room. Chairs and Tables were neatly positioned and aligned, but only one of them was occupied. Two figures were sleeping in the chairs of the occupied table. Surprisingly, one of them was BlackFlame49.
“We should have made a bet,” XillComics murmured. The other figure turned out to be Lego_Tron.
“How did you guys get here?” SuperPup1 asked.
“Well, it’s rather a long story,” Lego_Tron said.
“We just need the summary,” SuperPup1 replied.
“Okay… Well, we got here through that weird tile and landed in that weird world. Just a while after that we found a blue portal and found ourselves in a post-apocalyptic world. After a while we figured out how to go from world to world using the library.” BlackFlame49 explained.
“Wait, library? Guys, do you think this is what the others have been talking about? The library?” SuperPup1 asked.
“No idea,” XillComics said.
“Anyway, since we are your hosts, we’ll show you the library. Where do you want to travel? We have almost infinite worlds at our disposal,” Lego_Tron said.
“Sounds cool,” Digital_Guy_4 said before XillComics could.
“Let’s go then!” BlackFlame49 exclaimed. They followed him and Lego_Tron out of the tavern and into the streets. SuperPup1 used that time to ask a few more questions about their experiences about this place, but didn’t get any clear answers for the most part.
________________________________________________________________________

“So… Cakery… What do you know about Anon?” Lax_Swag5 asked, not sure if he was still in his manipulative grip or not.
“Not much. He has apparently been stuck here for a few years and has been an experiment subject,” Cakery answered, his voice booming through the air.
“I don’t know about that… That was probably a lie so that we would empathize with him, causing us to trust him,” BlueFlame56 said.
“Wait… What?” Cakery asked, his voice loud as ever.
“Anon is evil,” BlueFlame56 explained.
“That’s not true… Brickster said the same thing too until Wiz proved that he was lying,” Cakery said, although it almost seemed as if he had shouted it.
“Wait… Wiz still thinks Anon is a good guy?” Lax_Swag5 asked.
“Yes,” Cakery answered.
“Flip… Blue, we need to get him out of there, it’s a trap, I smell it,” Lax_Swag5 exclaimed and ran down to the tunnels.
“You can smell it? You must have a very sensitive nose then,” BlueFlame56 commented as he ran after him.
“I said what I said, no need to bother me with it,” Lax_Swag5 said.
“Don’t worry, I’ll just bother you the next few months,” BlueFlame56 said and a wide grin spreaded over his face, but quickly disappeared as they entered the dark tunnels.
“Can you also smell Slimmy?” BlueFlame56 asked.
“Oh, shut up, will you?” Lax_Swag5 asked.
“No way, this is way too fun,” BlueFlame56 said.
“Yes, let’s have a little fun,” a voice said out of nowhere.
“Who is there?” Lax_Swag5 asked.
“Maybe you could try to smell who it is?” BlueFlame56 suggested.
“Last warning,” Lax_Swag5 said.
“Aww… Don’t spoil his fun,” the voice said. A chuckle echoed down and up the hallways.
“Yeah, don’t spoil my fun,” BlueFlame56 said playfully.
“Again; Please stop,” Lax_Swag5 said.
“Or else?” the voice asked.
“Oh, don’t get me started. I have plenty of ways to make you regret those words,” Lax_Swag5 said. BlueFlame56 glanced at Lax_Swag5’s face and knew immediately to never make any comment about his nose again, or else he would regret it. 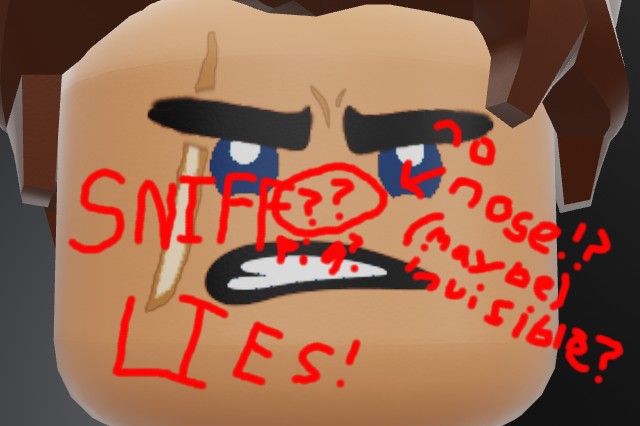 BlackFlame49 - Yes he does (appearently)
SlimBrick1
Nice chapter!!
The_An0nym
SlimBrick1 - Thanks!!
BlueFlame56
These are so Awesome!
The_An0nym
BlueFlame56 - Thanks!!
WizardBuilds1
The banter—
justyouraveragebuilder
what happened to Cakery? I mean, like Cakery was with Blue and Lax, but then he just teleported away to a little mouse droid and flying thingy
The_An0nym
justyouraveragebuilder - He noticed the data scroller & processor in the distance and approached it [03.0] (look at the bottom of the model-description)
by The_An0nym
139 models | 20.4k views
Suggested Models
Apocalypse Challenge (X23)
by ArcherMochi
Black Hawk
by Tarjei85
Spider-Man: Mysterio's Web
by Mystifier