OK
Delete ?
Warning: Adult Content
The content you were about to view is not suitable for minors.
The page that you are trying to access contains adult content, which may not be suited for minors. Please verify that you are aware of this, and are within legal age limit to access this content. Note that we take no responsibility for any content if you decide to proceed to this page as a minor.
Leave this page
I am an adult, continue
05.8 - It's no Joke
Like
Drag & Drop


Daedalus could finally breathe again. The pain slowly faded away, but it would surely take a very long time before the pain would reside entirely or until he’d get used to it. Now… Let’s try this, Daedalus thought. He hadn’t really listened to The_An0nym’s full detailed instructions, so didn’t really know how to change his form. Daedalus tried to focus on changing his shape, his being. Nothing happened. He tried it again; multiple times, yet it didn’t work. What did Anon say again? Ugh… I can’t remember… Why didn’t I listen that one time? Daedalus asked himself. Boredom slowly filled Daedalus, so he started to walk towards the Library portal. He walked through it, pain spiking by each step, until he found himself in the cool library. Daedalus lazily walked through the maze of books and shelves, determined to find their base. He was sure that The_An0nym could help him unlock his abilities.
________________________________________________________________________

FireBlade28 opened his eyes. He let out a short scream as a white figure greeted him.
“Are you alright?” the figure asked.
“W-who are you?” FireBlade28 asked.
“I’m Cakery,” the figure replied. FireBlade28 almost laughed at that statement.
“Sorry to disappoint you, but Cakery is a bit bigger than you,” he said.
“Oh… Almost forgot about that,” Cakery sighed. FireBlade28 couldn’t hold back anymore, and laughed for a few seconds.
“You forgot that you weren't Cakery?” FireBlade28 asked.
“What do you mean? I am Cakery!” Cakery protested.
“So you just forgot that you are a lot smaller and totally look different than Cakery?” FireBlade28 asked.
“Exactly! No wait… I am Cakery; Anon just changed… you know what: nevermind,” Cakery said. FireBlade28 still couldn’t stop laughing.
“Ugh… Just stop, will you? We still have to find the others,” Cakery said.
“Others? Sorry to disappoint you, but there are no others… I walked around in this building since weeks!” FireBlade28 exclaimed, getting more serious.
“Weeks?! How did you survive that long?” Cakery asked.
“I don’t know… I got lucky I guess,” FireBlade28 replied.
“But you found me! That means that there could still be more users somewhere!” Cakery exclaimed.
“Maybe… but don’t count on it,” FireBlade28 said. 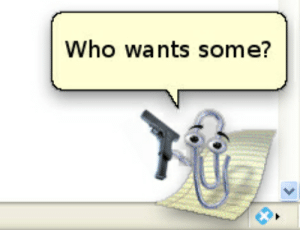