OK
Delete ?
Warning: Adult Content
The content you were about to view is not suitable for minors.
The page that you are trying to access contains adult content, which may not be suited for minors. Please verify that you are aware of this, and are within legal age limit to access this content. Note that we take no responsibility for any content if you decide to proceed to this page as a minor.
Leave this page
I am an adult, continue
20k Views!! / Original Song Performed by Wiz & the Boy-w/-Tall-Girl Band!!
Like
Drag & Drop

Wiz: Thank you all for coming tonight! (Or whatever time period it is for you today…) Anyway, in celebration of this time, I organized this short concert for you. However, the performance will only contain ONE song, a song I wrote myself. (Open minds, people!) *chuckles*

Wiz: Any questions before the concert starts?

An0n: *skeptical grin* I have one: You’re hosting a concert? As in, performing songs? Sounds fun—but you know that we can’t HEAR you, right?

Wiz: *grins back* Yes, I’m aware of that. However, most LEGO builders tend to have good imaginations, and I tried to write the song so that it’s not too confusing to read in your head. You can fill in the music. Hopefully, (whatever you imagine) it’s an enjoyable performance!

Predator: I have a question, too: Is there a specific song with a beat or music similar to this one?

Seb: Do you play the drums, or any other instruments in real life?

Wiz: *laughs* Heck, no! Even though I listen to a lot of music, I haven’t played anything as long as I’ve lived! A few years back, I learned some piano keys… but I instantly forgot them. I’m just not musically talented… *chuckles* That’s the beauty of MB. Here, I’m so talented—I can both play drums AND do vocals! (Which I’m gonna do!) *smirks*

Jaze: Those drumsticks look familiar… Are they your duplicated wand?

Wiz: Well spotted—and YES! *grins* All it took was a mirror and a well-aimed duplication spell! (I don’t know if a wand was intended as an instrument… but who cares?)

General_Veers: What was the inspiration behind your song?

Wiz: I don’t want to spoil it right away—but since I’m a frequent moviegoer, the song was very much cinema-based! It also has some unintended romantic overtones, but you decide what it’s about—a relationship metaphorically “changing genres”, or just a film director complaining about a bad crew member!

Justy: Sounds… Interesting. I have a few questions of my own: What’s with the getup? Should we all’ve come as bright green space crabs?

Justy: And the color scheme, too? A little hard on the eyes, if I’m being honest. Don’t get me wrong—I love it all—it’s just a little bold, for my taste…

Wiz: *laughs too* Those are excellent questions, Justy! My costume fits with the rest of the song’s theme. Also, “the bright green, slightly embarrassing space crab” look was EXACTLY what I was going for! *laughs* The color scheme just seemed creative, and kind of reminiscent of old-timer rock bands, like the Beatles! *cringes* (Not that I was implying I’m that talented).

Wiz: *briefly listens to earpiece, brightens* And now, I have some exciting news for you guys! I never planned to perform alone! Joining us from his own band—please welcome—OURA!!!!

Wiz: I borrowed his talents for today—(as well as his lovely voice) to join the duet! *laughs* (You have no idea how much these “big stars” hire for!)

Oura: *blinks incredulously* You didn’t PAY me anything! I didn’t even know this was happening…NOW. One minute, I’m lying on the couch, eating chips—and the next, I’m surrounded by a small crowd, dressed in a suit of armor—and expected to play your stupid song! SERIOUSLY, dude!

Wiz: *strained smile, makes cut-it-out gesture* Surely you can spare a few minutes of your time—can’t ya, old-buddy-old-pal? The PEOPLE want to hear you!

Oura: *glances over crowd with interest, hesitates* Okay—fine. I’ll do it. I DO like adoring crowds…

Wiz: *rolls eyes, changes subject* I’m sad to say that Slim and Tall… won’t be singing with us today. *sadly* But that’s okay—it’s okay to let go of them.

Wiz: *playful smile* HoWeVeR… There’s no reason why they can’t still PERFORM with us! Okay—so maybe the model gave it away! Still—please put your hands together, for brother and sister—ON THE KEYS!!!!!

Slim/Tall: *both seem surprised, then silently wave to crowd, grinning*

Crowd: *cheers and applauds, realizing that the single-song concert is starting*

Wiz: We’re all here—AND WE’RE ALL READY! Get ready for the FAIRLY EXCITING time of your lives—as you listen to this new hit…

“SCI-FI TO FANTASY”, an Original song written by me, and performed by a new group that’s been born today…
WIZ & THE BOY-W/-TALL-GIRL BAND!(tm)

Wiz: Oh, you changed this theme...

Wiz: Director's chair was mine...

Oura: (But you stole it out from under me!)

Both: THIS SCREENPLAY'S WRONG—FROM SCI-FI TO FANTASY!

Wiz: Oh, you changed this theme…

Oura: (But you changed it to a symphony!)

Both: THAT YOU SCRAWLED OVER THE SCRIPT!

Wiz: Oh, you changed my life…

Wiz: The lighting's off…

Oura: (It shines on you instead of me!)

Wiz: *pauses* All right—that's what I'm talking about!

Wiz: *rhythmic, gentle drum beat* Thank you all! Guys—give it up for my main man... OURA!

Oura: THE DIFF-ERENCE BETWEEN YOU AND ME—BAD CHEMISTRY!!!!... *trails off and focuses on wild playing*

Wiz: *lets out whoop* Let's hear it for Slim and Tall on keys, everybody!

Crowd: *whistles of appreciation—except from those who physically can’t*

Wiz: But your claymation takes too long to create...

Wiz: This production's freaky... From sci-fi to fantasy...

Both: *holler with all their might* WHY DID YOU TAKE THIS THING TO FANTASY?!!!

*lasers strobe wildly, then go out*

Wiz : Thank you all! *wide grin* We’ll be here—well… Forever. (As long as this model stays up!) Hopefully you enjoyed this song, and hopefully this won’t be the last you “hear” of Wiz & The Boy-w/-Tall-Girl-Band! *chuckles, adds* (Trademark). 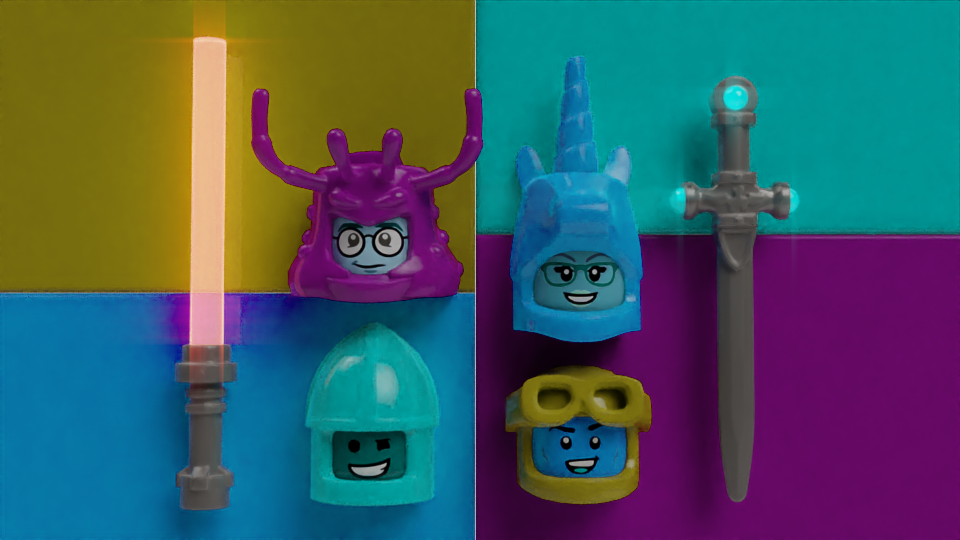 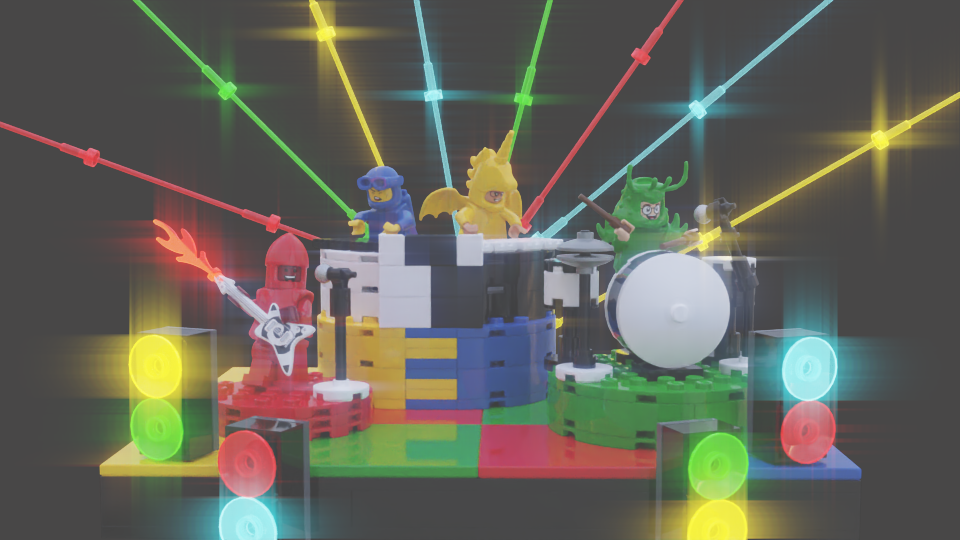 20k ViewsBandConcertMilestoneMusicOuraSlimBrick1SongTallGirl2006Wiz & The Boy-w/-Tall-Girl-BandYes, I wrote it myself… *smirk*
Download model inventory: CSV | Bricklink XML
0
Part
Image
Quantity
Name of the part
Direct Link
Embed Viewer
50 comments
Post comment
Login to comment
KingofAce
out of what part of the song I read, I read to the beat of that song like (just an old town girl, living in a lonely world) I think that's how it goes, congrats! cool model! goodbye!
justyouraveragebuilder
you nailed my personality, but as for rageb... this must be a different reality. everything he says is backwards,(except with his translaor, which makes his voice all caps and robot-y) and his singing voice is AWFUL. and I mean CAT-A-STROPHIC. plus, his skin is blue, his eyes are white, his teeth are black, and his toungue is like a bright cyan. is this Oura? I mean, this seems more like him.

Congratulations, Wiz! 20k is quite the milestone, you might be one of the most viewed profiles on MB, if not the most viewed.
SnapStudio
Scrubs actually has around 270K views. O_O
Fer1611
._.
legomaster6383
Ow my ears
Operator011
Snap: Woah. O_O
Duckduckguz
Nice!
General_Veers
That's epic!!
Congrats!
Fireblade28
*stagers back from extensively load music, razes a 'thumbs up' shakily*
Fer1611
XD
AABuilds
Oof-Totally forgot to bring earbuds...
My eardrums exploded after Rageb hit the guitar solo. Everybody started jumping to the stage and I had no idea what was going on...I think I missed the best part.

system failure
WizardBuilds1
KoA - Thanks!
Justy - Okay—sorry about that. I only chose “red guy” because he plays guitar. I thought HE would be rageb, because of the “rage=red” thing…
Worriz - I’ll keep that in mind!
Snap - Thank you!
Fer - Thanks!
BA7 - Thank you!
Op - *searches up album* I love Queen, but that actually wasn’t my intention! And just because I have a lot of views, doesn’t mean I’m superior to you and the other “OG’s”. (You’re right, though—I must be in the top 20! )
SebastianButton.lego
Nice and congrats!
Mr_worriz
@WizardBuilds1
Please do!!
Cold_fire
That was awesome man and congrats on the 20,000 views
Cole08
AMAZING!!!!!!!!!!!1
WizardBuilds1
Duck “The Duck” Guz - Thank you!
Veers - Thank you! (That means a lot, coming from an Imperial General! )
FB - *concerned* There’s a otorhinolaryngologist I know…
AAB - I warned you!
Seb - Thanks!
Cold/Cole - Thanks!
justyouraveragebuilder
just replace the name if you wish it, fellow producer!
justyouraveragebuilder
also, don't worry about your ears, I'm a meca-ophthalmootorhinolaryngologist
Operator011
Wiz: Oh? Interesting. Looks great regardless! And I wouldn't call myself OG at all, I just haven't posted a lot lately.
WizardBuilds1
Op - Yeah, yeah—you’re not fooling anyone. Of course you’re an OG! (Or at least a legend… )
Operator011
Wiz: So you saw that series Greenie made?
legomaster6383
You forgot me
WizardBuilds1
Op - Of course!
Also, I might not be the most popular, or “legendary”, but if I’m being honest, every MB user has a “skill” that compliments their builds. (Justy is the jokester, An0n is the animator, etc.) Anyway, I think my skill would be that I’m the “idea guy”. Sometimes good, hardly terrible—but I’m never in short supply…

(There were actually TWO mistakes in that scene: I called you Oura, and I also called Oura Rageb).
justyouraveragebuilder
gooooooood... your journey to the dark side is complete.
WizardBuilds1
Justy - WATCH THIS.
justyouraveragebuilder
I've seen that one before!
WizardBuilds1
Justy - Goooood… GOOOOOOOOD….
NinjaDude2011
Wow Wiz❗That's a big achievement❗
Now you can go for 40k views❗.... right❓O_o
NinjaDude2011
Nice song also❗
WizardBuilds1
Ninja - Thanks!
by WizardBuilds1
309 models | 24.0k views
Suggested Models
Guess the (Forgotten) MecaBricks Users!!
by Mr_worriz
Family House
by Scrubs
Dropship
by WyndGekko